The Ruhr region - the metropolis at the heart of Europe

The Metropole Ruhr has undergone a unique transformation in the course of the past decades. Where in the last century it was mining and the steel industry that characterised the people and landscape in the Ruhr region, today it is back to nature and welcome culture! From an economic viewpoint, too, the structural transition in the region has seen it become a location for services, technology and knowledge.

The Internationale Bauausstellung Emscher Park provides an impressive illustration of how such a transformation is possible. Between 1989 and 1999 more than 120 projects were initiated: industrial wasteland and drainage channels were restored, old industrial sites reconfigured for art and culture, leisure and sport or use as office space. The result has been a whole series of industrial monuments that delight both tourists and locals alike on the Industrial Heritage Trail. And the transformation is not yet complete. Following its development as a cultural metropolis, the Ruhr region is now en route to becoming the "Klimametropole Ruhr 2022".

People from over 150 nations

As the third-largest conurbation in Europe, the Ruhr region is home to over five million people, more than half of whom live in the cities of Duisburg, Oberhausen, Mülheim an der Ruhr, Bottrop, Essen, Gelsenkirchen, Herne, Bochum and Dortmund. The people who live in the Metropole Ruhr are as varied as the region itself. More than 150 different countries are represented here. They are spread throughout the 53 towns, cities and municipalities that comprise the Ruhr region. The Ruhr region has something to suit every taste and requirement.

The Ruhr region - Detailled Information about Cities and Districts 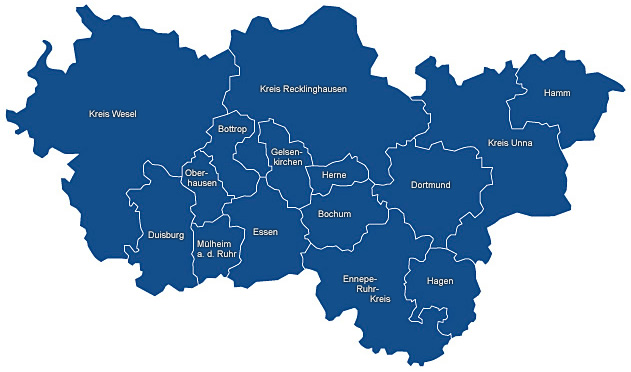 Living in the Ruhr region

Learn in the Ruhr region

Housing in the Ruhr Region